Coming into the series against Melbourne we knew it was going to be tough. With little preparation together as a team against a school that had beaten us for the past four years, we knew we were going to have to play well together. It started off badly, losing the toss and them choosing to bat on a good pitch. However they won nothing else in the first few overs with our two opening bowlers, Tully and Kabir, bowling three maidens in a row before Kabir clean bowled one of their openers. Things continued to go our way with Kabir taking another two wickets and Tully taking another one.

With Melbourne now struggling at 4-9 we were totally on top. Even with the change of bowlers Melbourne were rarely able to find the gaps. Even with the change in bowlers to Manil and Vivek didn’t make scoring easier. The sustained pressure from our bowlers meant there were few bad balls. This meant when the occasional bad ball did come along, they were forced to really swing at it. This led to our 5th wicket with a Vivek full toss being hit in the air straight to mid-wicket. Manil also got in on the action grabbing a wicket for himself. James and Peter were brought on to finish up the tail. Peter’s consistent line and length meant that the batsmen struggled to get any runs at all from his tight line and length. This forced the batsmen to play irrational shots and he took two wickets for himself. James added another wicket to the total with a slower ball that bamboozled the batsmen. Tully bowled out the last batsman and Melbourne was all bowled out for 38.

Going in to bat we knew that it was a good batting deck and along with the great performances of our openers recently, we were raring to go. Our openers saw out the opening bowlers and slowly amassed the forty runs needed. We reached the total without losing a wicket and recorded a massive win and huge confidence boost going into the next game.

Having completely dominated the first game we knew that we had to continue our form and not let the series slip away from us. We knew we were the better team but we still had to prove it. Having finally won a toss, we went in to bat full of confidence. The slow outfield of McKay meant that boundaries were hard to come by. However this did not affect our openers whose quick running between wickets mean that run rate stayed high. Viveks high energy levels at the crease meant we were able to get singles even when the ball was hit straight to the fielder.

At first drinks we were 0-42 and looked set to take a commanding hold of the match. After seeing off the opening bowlers they continued to accelerate the run rate. Both openers continued there quick running between wickets that kept the run rate above 3 an over but were still having trouble finding the boundary. On numerous occasions a beautiful pull through midwicket from Vishal fell agonisingly short of the boundary. However this did not stop them scoring freely and both openers continued to cleverly wor the bowlers around.

With both openers approaching 50, Vivek began to accelerate and managed to get to his 50 in style. He started taking chances after his milestone, coming down the wicket to the spinner and smashing back over his head. Just when it seemed like Melbourne wouldn’t take a single wicket all tour, we were hit with incredible bad luck. A beautiful Vishal straight drive went straight and flicked the bowlers hand on the way past before it crashed into the stumps. Vivek who was backing up was run out. There was nothing he could do and it was the only way Melbourne looked like getting him out. Vishal managed to reach his 50 before he fell to poor shot. Unfortunately the run rate slowed dramatically after the dismissal of our two openers. Both Shanshank and Karthink attempted to lift the run rate but it wasn’t enough.

Having bowled Melbourne out for a mere 38 last game we knew that as long as we bowled like we did last game we would win. Melbourne were not messing around this time though, opening the batting with their best two batsmen. Although we knew that as soon as we could get a break through here, the rest of the wickets would come quickly. However when our pace attack failed to do this things started to look better for Melbourne. While they were below the required run rate they still ad not lost a wicket so we turned to spin.

Eli managed to get the breakthrough, dismissing the top three batsmen. Raphin also got in on the action, bagging 3 wickets for himself as well thanks to the great wicket keeping of Tully. With the fast bowlers brought on to clean up the tail we knew we had the game in the bag. With one wicket left to grab to bring home the Barberis Cup we brought on our usual wicket keeper Shashank to bowl. A long hop from Shashank was belted at Manil who took an amazing diving catch to win the game and the series. 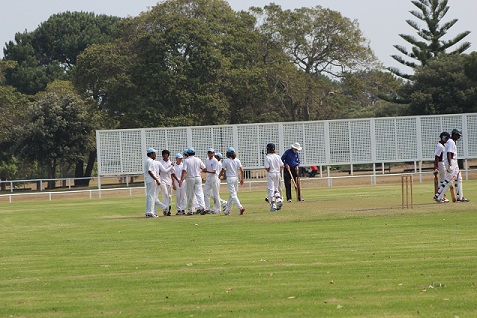 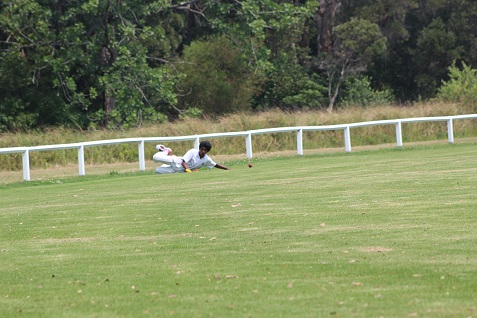